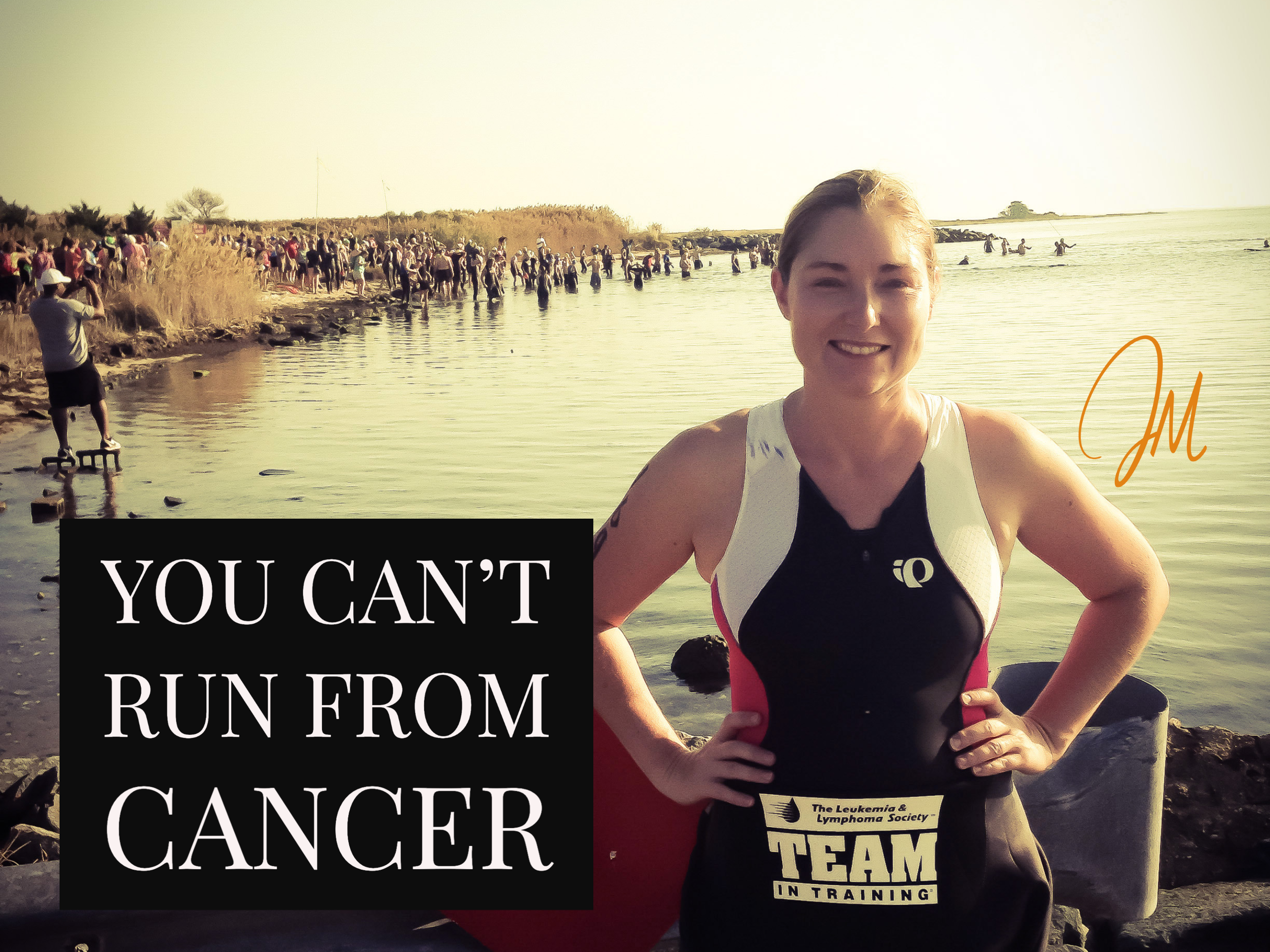 You can’t run from cancer. I remember it like it was yesterday, although it is a time in my life I try to forget. But do I want to forget it? After all, my children were still babies. Who really wants to forget that precious time in their lives?

At first, it was a dull pain. It was periodic and barely noticeable. It started in August and I was distracted with chasing around three small children who were just 2, 4, and 6 years old at the time. I found myself fighting for “me time” and struggling to get my pre-baby body back, so I trained for a triathlon. This was no small feat, it was a commitment. It involved biking on the weekends, running during the days, and swimming after bedtime. By the time the pain rolled around, I was combining all three of those things (called a brick in triathlon lingo) in anticipation of my October 5, 2013 event.

As the leaves turned and school began, training became intense. Unfortunately, so did the pain. It was a stabbing in my left breast that was not constant, still periodic, but insisting on its presence. The hot stab would come out of nowhere and by the end of September would wake me from slumber. I surmised that it was part of training for the triathlon because everything hurt at this point. I was nearing the finish line of training and ready for the event and nothing could stop me now.

The Osprey Sprint Triathlon is held on the Eastern Shore of the Chesapeake Bay in Maryland. The open-water swim is protected in the beautiful waters of the Chincoteague Bay and is near my family home. The morning of the tri, I downed my beet juice while it was still dark, loaded my gear in my car, and headed to the race. I did not sleep much the night before, not because of nerves, but because of the return of the stabbing hot knife pain. I was going to have to stop training after this and go to the doctor if it did not subside.

So there I was on the day of the big triathlon. I didn’t die, which was actually my main goal. I was never under the misconception that I was actually a competitor. My goal was to finish, and I did. An interesting fact about me-I hate running. Why do they have to put that last? I know, they don’t want you to drown in the water so swimming is a good first. But really, we have to finish with my hardest of the three? Although I finished, I’m pretty sure the guy was collecting the orange cones as I trotted my way into the finish line. But damn it, I did it!!!

In the coming weeks, I really dialed it down. I ran in one of the night glow runs with friends, but not much more than that. At the end of October, I went to visit my OBGYN because that pain had not decreased. It was still screaming at me, a silent but painful reminder that maybe something wasn’t quite right.

My OBGYN, Ruby and I had walked a very long journey of many miles together prior to this step. Infertility is a long road and one that I, like many others, had to walk. I did so with Ruby by my side because all three children at that time were conceived with assistance. She held my hand through emergency surgeries and told me everything was going to be okay. So, here we were again. What in the world now?

Her words, “I don’t feel anything, you are a healthy 37-year-old with no family history, you just finished your first triathlon, you do not smoke or drink to excess. I have no reason to believe this is anything other than a fantastic opportunity to get a baseline mammogram before you are 40. But Jan, get the 3D when they offer it, I want you to be sure to get the 3D mammogram not the regular.” With that, I left her office and scheduled the appointment. Hormones. It was hormones to blame. Or was it? You can’t run from cancer, and this is my story.

My newsletter contains real-life stories, tips and action items for parents, grandparents, caregivers and those who love transgender, non-binary and gender diverse people. I hope you’ll join me in building a community together.