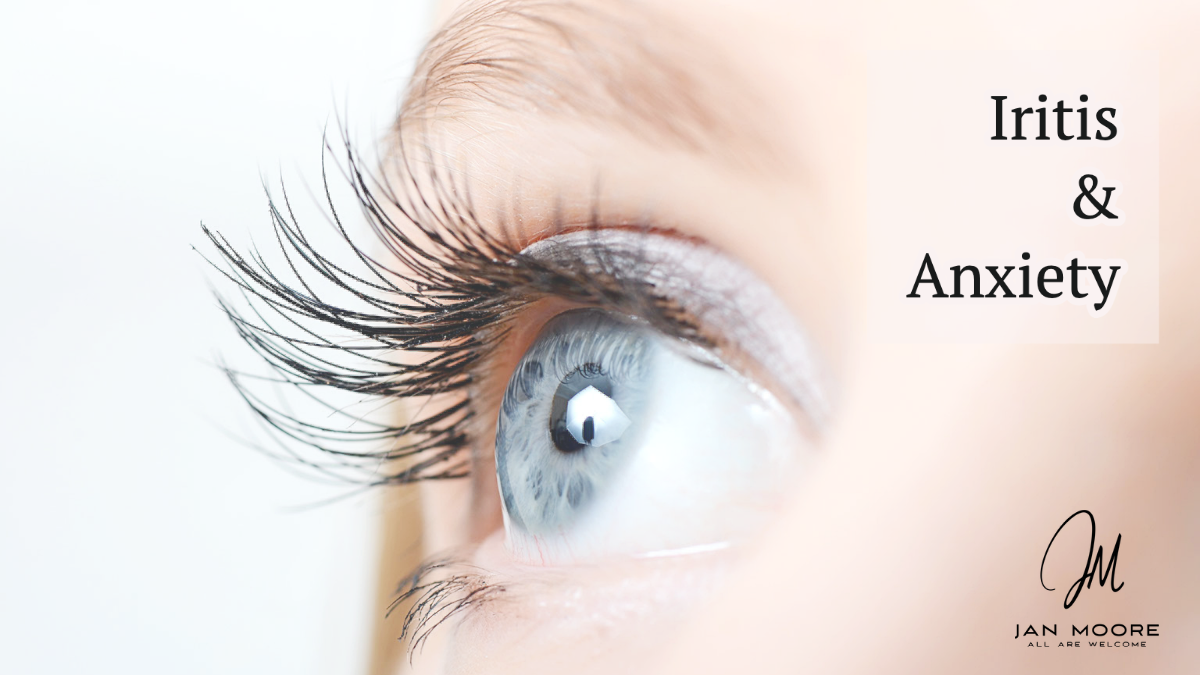 I never realized that there are physical manifestations of anxiety.

It is funny the things we take for granted. As a writer, I am incredibly dependent on my ability to see words on paper. While I often dictate into my Notes app while I am thinking, there is nothing like looking at pen on paper. The editing process is cumbersome. Finding the right word and moving thoughts around to make the piece more coherent takes great effort.

The most common type is an inflammation of the iris called iritis (anterior uveitis). Symptoms include redness, pain, light sensitivity, blurred vision, and dark floating spots in the field of vision.

Today, just 17 days later, I was told that there’s nothing wrong with me. It’s “all in my head.” I have high anxiety. And to quote the doctor I saw today,  “you need to dial it down and notch.”

So how do we get from here to there? I’m asking myself the very same question.

You see, 19 days ago I woke up at 5:30 in the morning with severely dry and painful eyes. I brushed it off because it was the wee hours of dawn, but I woke up again two hours later in extreme pain. I had eye drops leftover from a corneal abrasion six months ago, so I immediately started to treat my eyes.

It was Father’s Day and I was determined to make it special. So, with beet red, weeping eyes, I drove my car to pick up groceries for a feast. Immediately after leaving my neighborhood, I realized just how impaired my vision was. I barely made it to our farmers market to pick up the ingredients I needed.

Upon returning home I realized that the drops weren’t helping. But I continued to try. The next day I picked up a prescription for pinkeye drops. Self-diagnosis, of course. Drop by drop willing this to go away. Sunglasses on constantly, crying, weeping eyes, pain, grit. It was unlike anything I had experienced before. Clearly an anxiety attack (insert eye roll).

Two days later, I presented at the local ophthalmology office. Having described my symptoms that now included pressure behind the eyes and a headache in addition to those already described, they got me in immediately.

The kind, female doctor diagnosed me with Iritis. She saw abnormal cells, inflammation and prescribed steroids four times per day. Filling out a lab sheet, she instructed me to have my primary care draw labs because this condition is usually a symptom of an inflammatory process going on in your body. Being a cancer survivor, I was slightly freaked out. I called, got in with my primary care, and labs were drawn. This led me to the rheumatologist.

There is no end to this story. The rheumatologist instructed me that I needed to see the ophthalmologist again as soon as possible. My female, very pregnant ophthalmologist had gone out on maternity leave a week earlier than expected. The appointment that I was supposed to go to just two days prior was canceled.

This guy walks in and says, “How can I fix you today?” He doesn’t even look at me. Immediately put off, I ask if he has read my chart? He says no and begins his examination while barking orders at his assistant, who is reading the other doctor’s findings. He disagrees with everything. There is nothing here. Your eyes are perfectly normal.

And then shares, “What I see here is a highly anxious patient. You need to dial it down a notch. Your clinical presentation is disparate from your clinical findings. There is nothing wrong with your eyes. Has anyone done an MRI to look for demyelination?”

This, my friends, is right up there with my 42-year-old friend’s endocrinologist who wanted to know more about her pregnancy plans than her thyroid symptoms. What in the WORLD is going on? Later in the conversation, he quipped that nobody listens to him and just calls him the “mean doctor.”

I don’t know what is going on with my eyes, but I will tell you this. This is scaring me to death. For the first time in my life, I am struggling to see. I have pain in my eyes and something is definitely not right. I can also tell you that prescribing me to “dial it down a notch” is not an effective remedy to my issue.

So friends, remember, it is not okay for a person in a position of power to make you feel like you are crazy. I left questioning my sanity and I am not crazy. There really are physical manifestations of anxiety. I did not make up my symptoms and am not seeking attention or looking to get out of anything. This person needs to get the heck out of my way and take a good hard look at who really needs to “dial it down a notch.”

My newsletter contains real-life stories, tips and action items for parents, grandparents, caregivers and those who love transgender, non-binary and gender diverse people. I hope you’ll join me in building a community together.